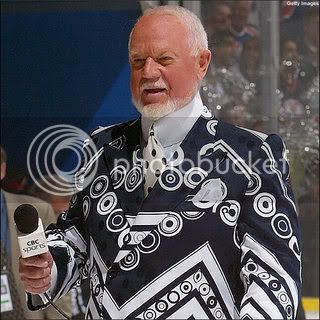 Don Cherry seems to have a thing about ankle guards. If an NHL player wears them, Cherry will be the first to notice. 'The Don' seems to think they’re a good thing, and is surprised more players don’t wear them.

(Don Cherry is hockey commentator for CBC Sports in Canada)

This from the guy who’s famous quote on Visors:


“Most of the guys that wear them are Europeans and French Guys.”

caused an uproar in the hockey world and led to an investigation by the Canadian government and the decision to put Coach's Corner on a seven-second delay to allow statements deemed inappropriate to be censored. (Even though he was right.)


His latest ankle guard sighting was Saturday night on Hockey Night in Canada.

He pointed out that Josh Gorges of the Canadiens was wearing a pair. They look a lot sleeker than the bulky ones I’ve seen for sale online. Does anyone know who makes them?

On a post back in Feb 08 I wondered if ankle guards might be a good idea. I still haven’t met anyone who actually wares them.

The only other NHL player I know wearing them is Chris Phillips. He uses them to protect his sore ankle that was wounded from blocking a shot that caused his foot to bleed.

Chris Pronger doesn’t wear ankle guards but he has modified his shin pads to help his feet stay somewhat healthy while he block shots.


"There is a piece of hard shin pad inside the pad to help aid in dispersing the shock of a shot to my foot. It has worked quite well over the years and has probably saved me a few times from breaking my foot. While it doesn’t stop the pain or the sting of a slapshot it definitely helps to protect."

Unlike Visors, ankle guards still haven’t made the big time. I doubt they ever will.

Had this happen many times.Taking one on the ankle is very painfull.Your always told to leave youre skate on to keep the swelling down,but the first thing you want to do is take it off.

I've taken a lot of shots to the foot but one got me on the inside of the foot pretty hard, turned the whole inside of my foot black. Went out and got 'Skate Fenders'. Have skated with them once and didn't even notice them while playing. Before the game in the locker room was another story...

Yes I agree to you Mark that taking on the ankle is very painful. I appreciated this post and I was impressed too. Big thanks.

Maybe in the old days pro's didn't wear ankle guards but they do now. Skate Fenders are a clear plastic guard with velcro attachments. Hard to see but you can spot them in still photos. Manufactured in Grayling, MI in a guys garage, I think.

Line changes on the fly